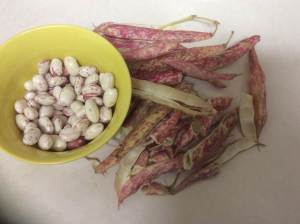 I’d bought some fresh cranberry beans at the farmers’ market, which were very tasty and tender

IT’S THAT TRANSITION TIME — warm and summery one day, cool and rainy the next. During the cool rainy (and windy) days last week, I wished I had some soup to eat. . . but I didn’t feel like making my usual fall and winter soups. I didn’t want to rush the season.

Then I saw this article and recipe in the New York Times for soupe au pistou, the Southern French vegetable soup flavored with basil (usually a basil pesto without the pine nuts). 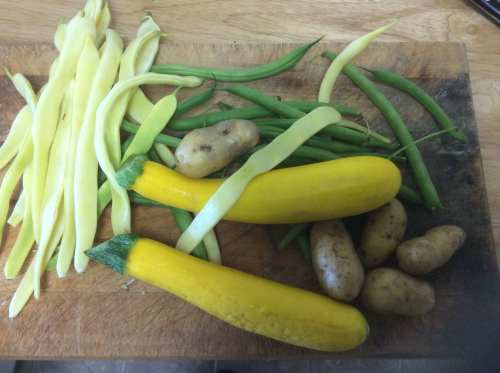 The lovely thing about this particular recipe by David Tanis is that it uses all those vegetables that are in season right now, in September. However, it’s also very adaptable, and there are countless variations. For example, in a second batch I made, I cooked dried, soaked white beans instead of the cranberry beans. (Yes, I imagine you could substitute canned beans). And I couldn’t find romano beans, so I just used more regular green beans.

Another adjustment I made to the recipe was to skip the separate step of blanching the vegetables, and just cook them right in the pot (as one reader suggested), to my liking. I kept them bright and slightly crunchy for the first serving; the next day, when I reheated the soup, the vegetables were less bright but more tender. Both variations were good.

Some people use rice or macaroni instead of potatoes, or insist that tomatoes are essential if you want to call it soupe au pistou  (Here, for example, is a completely different recipe).

I like the potatoes, though, and I think the soupe is fine with or without the tomatoes. Since I’ve never had an traditional soupe au pistou, I can’t judge its authenticity except to say I like this soup, whatever you call it.

The dollop of basil pesto (without nuts, but if you have some usual pesto on hand, no one will object) adds a distinctive seasoning, but this soup is flavorful even without it (maybe then you should call it something else). 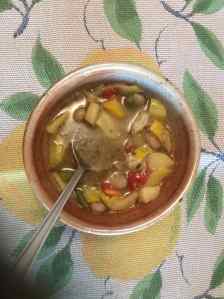 Really, this soupe au pistou is so good that it led me right back into the soup-making season–without regrets.

Filed under fall, Praise for other cooks, soup, vegetables